The term continuous spectrum is mostly found in physics and mainly involves light and colors found therein. Spectra also help us understand how atoms absorb different light energies to provide the color we see. There are two main types of spectra. Continuous and line spectra and while these are generally different, it is possible to have both of them. Continuous spectrum can be learnt vividly in the context of light and electromagnetic spectrum. Here is a brief definition and description of these spectra as well as their differences:

Those who have seen a rainbow have probably seen a continuous spectrum as it is agreed that the sun’s light contain this kind of spectrum although you will learn that this is not so all the time. When white light is passed through a prism, it produces a rainbow of colors because of the different wavelengths that refract (bend) at different angles when they go through the prism.

If the rainbow that is produced has all the colors from red to violet, and has no gaps between them, then it is referred to as a continuous spectrum. A beam of pure white light attainable is some laboratories often contain this spectrum. It is also possible to obtain continuous spectra when you heat up different materials until they glow.

The correct continuous spectrum definition therefore exhibits when, within a given limit, all the wavelengths are present.

How is a continuous spectrum produced?

We also get a continuum spectrum from a hot solid, so for example the light produced by incandescent light bulbs is a continuum spectrum. These kinds of bulbs give off light by a very thin coil of metal, the filament, (usually tungsten) getting extremely hot from having an electric current passed through it. When the filament gets to thousands of degrees, it gives off light (source).

When continuous spectrum, like in a rainbow, comes from white light, line spectrum is evident in colored compounds. Light spectrum only has a few wavelengths (not all) or lines. Atoms tend to absorb some wavelengths when electromagnetic radiation is passed through them which display only a few narrow absorption lines when recorded. 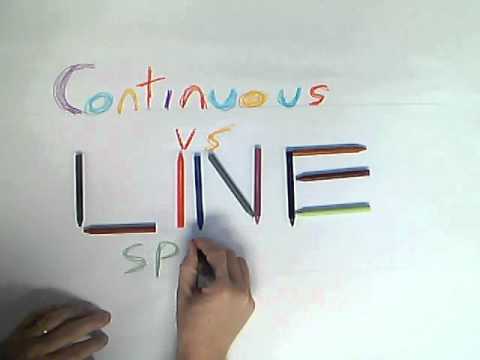 The chemistry of continuous spectrum

Even with the sun’s light which is thought to be continuous since we see rainbows after it rains. There are often gaps where nothing is visible when the light is analyzed in detail through a spectrometer. A truly continuous spectrum should not have any gaps and identifying gaps in the sun’s light is how scientists know what it is made of. The absorption gaps detail other elements including hydrogen and helium.

Rainbow is generally accepted as an example as it details all the colors (wavelengths) from red to violet without any gaps. However, the sun’s light is not a perfect example of continuous spectrum as it contains absorption gaps therein. A more ideal continuous spectrum example can be shown when you pass white light through a prism in well set lab environments. Other physicists have also shown that heating up objects to the point which they glow can produce the spectrum. This is because atoms emit white light at glowing point and have thus given away all the energy absorbed.

Is color inherent to an object? Or is it in the light?

According to Issac Newton, color is not inherent to an object. When light hits the surface of an object, it is either absorbed or reflected.

It is only the reflected light that we see and perceive.

What other objects have a continuous spectrum?

Apart from a rainbow, you can sometimes see the continuous spectrum around the sun or moon.

If you look around them (but not directly or too long at the sun at least), you may be able to see a halo that shows the continuous spectrum.

The light refracts through ice crystals in the atmosphere.

Another example would be the underside of a CD. When you look directly at the reflective side of the CD, you may see your reflection. However, if you turn it an angle, you would see the colors of a rainbow.

How to achieve a continuous spectrum?

You can create your own continuous spectrum with a prism. A prism is made up of any transparent material that can angle light that passes through it.

As light enters the prism and leaves another angle, the light is spread through the continuous spectrum.

Do all light bulbs produce a continuous spectrum?

Only incandescent light bulbs produce continuous spectrums. This is because the light source is a heated metal wire.

A fluorescent light bulb on the other hand produces an emission spectrum. This is because the light source comes from gas that is excited.

An emission spectrum is a spectrum of frequencies that happens when an atom transitions from high energy to low energy.

An absorption spectrum is a spectrum that takes place when light passes through cold and dilute gases.

How does a spectrometer work?

An optical spectrometer is a machine that takes light and digitizes its spectral components.

Once the spectrometer receives the light, it translates the data as a wavelength and shows it on a computer.

Isaac Newton was the first person to observe that the light from the sun was made up of multiple frequencies. He did so in 1666 by filtering sunlight through a prism.

Almost 200 years later, Gustav Kirchhoff and Robert Bunsen showed that spectral lines are due to chemical elements in objects.

Kirchhoff was also able to theorize about an object that absorbs all light and does not reflect any color. This led him to believe that there may be an object that could show a continuous spectrum without any emission or absorption lines.

Is there any color in a blackhole?

A black hole’s density is unrivalled. It is the most dense thing in the universe. Thus, black holes have very strong gravitational fields.

These gravitational fields absorb everything, even light. Since all light is absorbed, there is no color.